A Verse for Leap Year Day 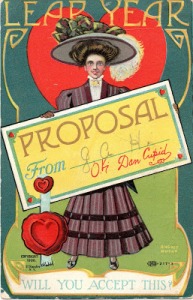 Once upon a time, when the rules of courtship were strict, and a woman could only wait for a man to get a clue and propose marriage, tradition had it that during a leap year a woman could propose to her tardy and reluctant male. According to legend the custom grew up in Ireland, where St. Patrick allowed women this opportunity every four years, after St. Brigid complained to him that the girls were having to wait too long for marriage. Another legend attributes the custom to Scotland, where Queen Margaret decreed that during leap year a maiden could make the first move and snare the man she admired.

There is no evidence for either of these stories, but the tradition of a leap year proposal

was a popular legend. It became a humorous trope employed by storytellers, cartoonists (think Al Capp and Sadie Hawkins), and versemakers like Pres Longley. The idea may have faded away in today’s society, but in the 19th and early 20th century it had great currency.

I posted one of Pres’s leap year verses in January. Here is another one.

Nancy is a retired librarian who lives in Chico, California. She is the author of John Bidwell: The Adventurous Life of a California Pioneer.
View all posts by nancyleek →
This entry was posted in Pres Longley, Uncategorized. Bookmark the permalink.