The Story of So-Wil-Len-No Avenue

I was reminded this afternoon by Sandy Hill that I never followed up on the origin of the name of So-Wil-Len-No Avenue, which she asked about in a comment. The background is interesting, and worth knowing for any Chicoan who enjoys learning about local history. 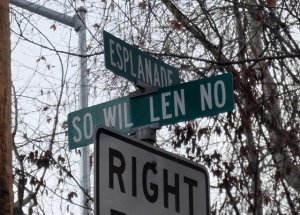 So-Wil-Len-No Ave. runs between Bidwell Mansion State Historic Park and Big Chico Creek, from The Esplanade to Arcadian Ave. There it turns into a campus road, and ends at Tehama Hall. Once upon a time it went further, at least as far as Warner Ave. No structure has an address on So-Wil-Len-No, as far as I know. Google maps spells it Sol-wil-le-no, but what do they know?

It is also sometimes spelled without the hyphens, as Sowillenno Avenue.

The avenue was named by Annie Bidwell for her dear friend, Maggie Lafonso. Maggie’s Indian name, according to Annie’s notebook, was So-will-len-no, as you can see in the image below. This notebook is in the Bancroft Library. Maggie’s name is the last in the list. 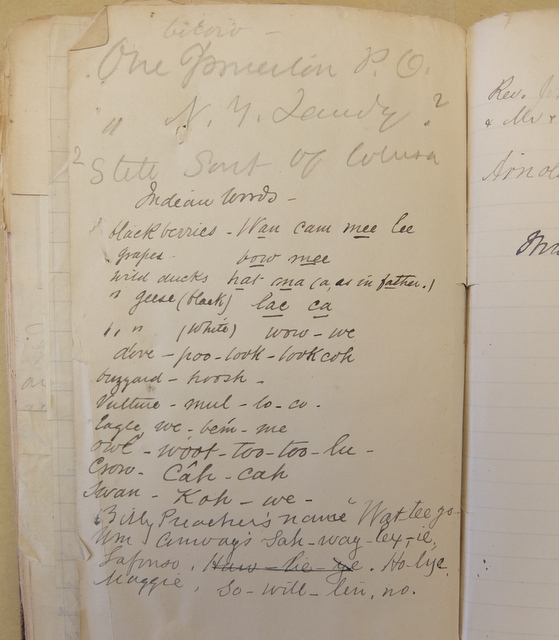 Maggie Lafonso was the daughter of Amanda and Holai Lafonso, the Mechoopda rancheria chief. Annie seems to have known that Amanda was the daughter of John Bidwell, a fact considered common knowledge among tribal members today. Maggie was therefore John Bidwell’s grand-daughter and someone whom Annie would have given particular attention and care.

Maggie is frequently mentioned in Annie Bidwell’s diary. She had a lovely singing voice and often sang in the Mechoopda church. She worked together with Annie in establishing the church, teaching and leading worship services. Annie relied on her as a liaison with the Indians on the rancheria and as a co-worker in Christian good works.

On December 21, 1907 Maggie, aged 25, married Joseph Mitchell, an Indian from Colusa. Annie recorded the event in her diary:

Maggie Lafonso married this Evg. Maggie notified me of her intended marriage at 6 this P.M. Invited me to marry her, but I told her it would be illegal. She then said she wished Mr. White if I could not. Young Head took Mr. White & I to village in his automobile to see if they had a license, “yes”.

At 6 P.M. Mr. White & I were at Maggie’s mother’s, where she was married to Mr. Mitchell in parlor. Present: Santa & Amanda Wilson & family. Billy Preacher, Pablo, Hayce, Martha (brides-maid) & others of family. Maggie & Martha dressed in white. Mr. Mitchell & Maggie represented in reverent attitude, at prayer, the figures in the Angelus. I spoke of it to Mr. White who said he had seen it. 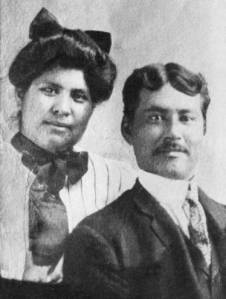 Sadly, Maggie Lafonso Mitchell passed away after childbirth in 1909. Annie, who had visited her frequently in her illness, was overwhelmed with sorrow at the death of her “beloved Maggie,” and memorialized her in the name of the avenue that ran alongside Bidwell Mansion.

7 Responses to The Story of So-Wil-Len-No Avenue