Wednesday, 15th. Started very early, day was exceedingly warm, passed through a gap in a ridge of mountains, came to a high dry plain, traveled some distance into it, saw the form of a high mountain through the smoky atmosphere — reached it, having come about 15 miles — found plenty of water — our animals were nearly given out. We were obliged to go so much further to get along with the wagons. We concluded to leave them and pack as many things as we could.

Thursday, 16th. All hands were busy making pack saddles and getting ready to pack.

John Bidwell tells more about the company’s packing adventures in The First Emigrant Train to California.

Packing is an art, and something that only an experience mountaineer can do well so as to save his animal and keep his pack from falling off. We were unaccustomed to it, and the difficulties we had at first were simply indescribable.

The trouble began the very first day. But we started — most of us on foot, for nearly all the animals, including several of the oxen, had to carry packs. It was but a few minutes before the packs began to turn; horses became scared, mules kicked, oxen jumped and bellowed, and articles were scattered in all directions. 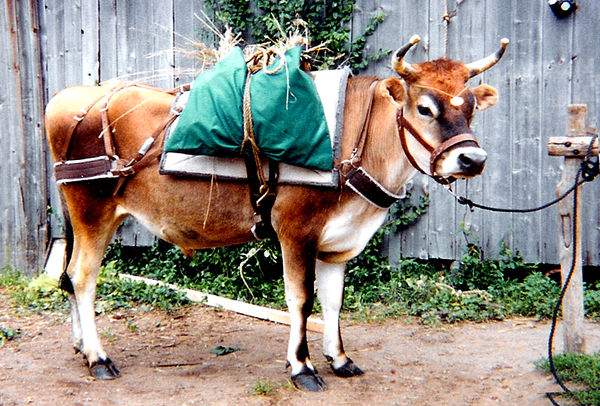 This is the only picture of an ox with pack that I could find, by “Country Mama” on a photography forum

It was a scene both comic and desperate. Oxen are not used to carrying packs — I imagine that trying to get some kind of pack onto the back of an ox is not an easy thing. But Bidwell had no choice — his two oxen were all he had to carry his belongings, other than his own back. They were also his dinner on the hoof.

Note all the strapping in this picture, and imagine trying to arrange that without the handy straps and buckles.