“We were on the road to California” 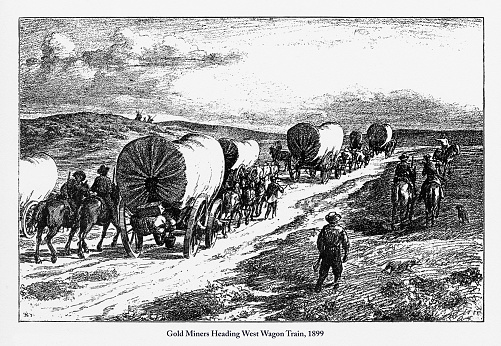 Luzena Stanley Wilson and her husband Mason set out for California one bright May morning in 1849.

The first day’s slow jogging brought us to the Missouri River, over which we were ferried in the twilight, and our first camp fire was lighted in Indian Territory, which spread in one unbroken, unnamed waste from the Missouri River to the border line of California.

That’s the way the American West looked to our pioneer forebears. It was one unbroken waste all the way to the Pacific Ocean. Utterly useless until the gold fields of California were attained. And of all the perils of the journey, there was only one that struck fear into Luzena’s mind. Indians!

Here commenced my terrors. Around us in every direction were groups of Indians sitting, standing, and on horseback, as many as two hundred in the camp. I had read and heard whole volumes of their bloody deeds, the massacre of harmless white men, torturing helpless women, carrying away captive innocent babes. I felt my children the most precious in the wide world, and I lived in an agony of dread that first night.

At this point in the westward migration there was actually little to fear from Indians. But every person in every wagon train had been brought up on tales of Indian depredations, and the fear of “the other” reigned supreme. But the Indians in this border region were only interested in trade.

The Indians were friendly, of course, and swapped ponies for whisky and tobacco with the gathering bands of emigrants, but I, in the most tragi-comic manner, sheltered my babies with my own body, and felt imaginary arrows pierce my flesh a hundred times during the night.

Luzena begged her husband to join with another wagon train for protection, but the “Independence Company” refused to take on women and children.

They sent back word they “didn’t want to be troubled with women and children; they were going to California”. My anger at their insulting answer roused my courage, and my last fear of Indians died a sudden death. “I am only a woman,” I said, “but I am going to California, too, and without the help of the Independence Co.!”

1 Response to “We were on the road to California”