Nothing but actual experience will give one an idea of the plodding, unvarying monotony, the vexations, the exhaustive energy, the throbs of hope, the depths of despair, through which we lived. Day after day, week after week, we went through the same weary routine of breaking camp at daybreak, yoking the oxen, cooking our meager rations over a fire of sage-brush and scrub-oak; packing up again, coffeepot and camp kettle; washing our scanty wardrobe in the little streams we crossed; striking camp again at sunset, or later, if wood and water were scarce. Tired, dusty, tried in temper, worn out in patience, we had to go over the weary experience tomorrow. No excitement, but a broken-down wagon, or the extra preparation made to cross a river, marked our way for many miles.

Oxen are slow beasts, steady and strong, but oh so slow. The company that made 15 miles a day reckoned it a good day. Imagine crossing Nebraska, flat, featureless, windy Nebraska, at a pace of two miles a hour. The oxen and the wind stirred up the dirt, and it blew about and got into everything. That was the monotony of crossing the prairie.

Luzena’s first crossing of the Platte River was fairly unremarkable, for the Platte is a shallow river. But the next crossing that she describes was different: 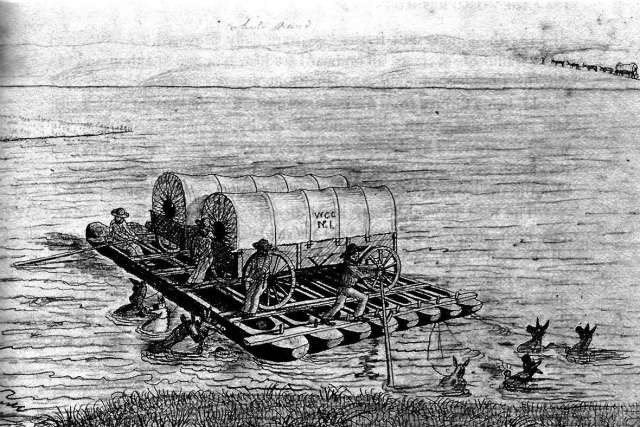 In strange contrast was the North Platte which we next crossed, a boiling, seething, turbulent stream, which foamed and whirled as if enraged at the imprisoning banks. Two days we spent at its edge, devising ways and means. Finally huge sycamore trees were felled and pinned with wooden pins into the semblance of a raft, on which we were floated across where an eddy in the current touched the opposite banks.

And so, all the way, it was a road strewn with perils, over a strange, wild country. Sometimes over wide prairies, grass-grown, and deserted save by the startled herds of buffalo and elk; sometimes through deep, wild cañons, where the mosses were like a carpet beneath our feet, and the overhanging trees shut out the sunshine for days together; sometimes over high mountains, where at every turn a new road had to be cleared, we always carried with us tired bodies and often discouraged hearts.

A monotonous road, strewn with perils. Who is up for a trip to California?

Nancy is a retired librarian who lives in Chico, California. She is the author of John Bidwell: The Adventurous Life of a California Pioneer.
View all posts by nancyleek →
This entry was posted in Luzena Stanley Wilson, Uncategorized. Bookmark the permalink.