Wagon train pioneers inevitably had to lighten their loads. First to go were heavy items like the rocking chair and the cast iron stove. Some emigrants took equipment that they thought would pay off in their new home, like pickaxes and millstones, and those too had to go. The road to California was strewn with cast-offs.

It was also strewn with dead beasts of burden. The oxen became worn down and when they died they were abandoned by the roadside. Some emigrants were left to pack everything on their backs and continue on foot through a scene littered with dead animals. The stench was terrific. Here is how J. Goldsborough Bruff depicted it: 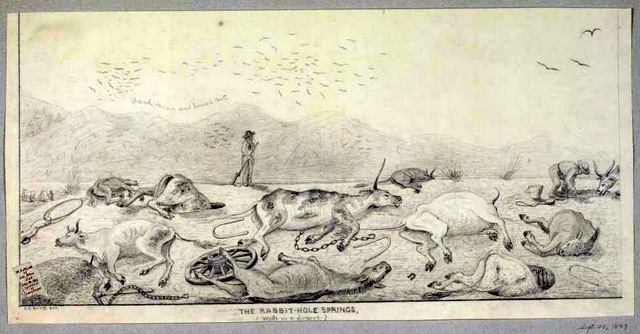 Luzena has her own story of lightening the load:

After a time the hard traveling and worse roads told on our failing oxen, and one day my husband said to me, “Unless we can lighten the wagon we shall be obliged to drop out of the train, for the oxen are about to give out.” So we looked over our load, and the only things we found we could do without were three sides of bacon and a very dirty calico apron which we laid out by the roadside.

Luzena had long ago discarded her excess pots and pans. They must have been down to very little other than flour, if three sides of bacon and an apron were going to make a difference.

We remained all day in camp, and in the meantime I discovered my stock of lard was out. Without telling my husband, who was hard at work mending the wagon, I cut up the bacon, tried out the grease, and had my lard can full again. The apron I looked at twice and thought it would be of some use yet if clean, and with the aid of the Indian soap-root, growing around the camp, it became quite a respectable addition to my scanty wardrobe.

The next day the teams, refreshed by a whole day’s rest and good grazing, seemed as well as ever, and my husband told me several times what a “good thing it was we left those things; that the oxen seemed to travel as well again.” Long after we laughed over the remembrance of that day, and his belief that the absence of the three pieces of bacon and the dirty apron could work such a change.

Nancy is a retired librarian who lives in Chico, California. She is the author of John Bidwell: The Adventurous Life of a California Pioneer.
View all posts by nancyleek →
This entry was posted in Luzena Stanley Wilson, Uncategorized. Bookmark the permalink.