You never know what will fascinate people, especially 150 years later. I have read lots of accounts of women on the trail and in mining camps, and I enjoy those, but I especially liked this story of Six Years Experience as a Book Agent in California. It gives a different view of life and work in California, and I am grateful to Amy Likins for writing down her story in such a candid and colorful way.

Although most people treated her courteously, she met some opposition along the way from both men and women. But Amy Likins always gave as good as she got.

I met a gentleman from the country, who was trading at one of the wholesale houses; he seemed very angry to think a woman should be selling pictures among so many men. He said I looked old enough to be married and have a family, and ought to be at home taking care of them. I told him I knew I looked old, [she was 37] but he need not remind me of it; that I had a family and was trying to make an honest living for them, at the same time telling him I presumed he was a bachelor, who would not know how to appreciate a wife if he had one.

The proprietor laughed heartily, and said, “Madam, you guessed right.” As I was wasting time I left him. 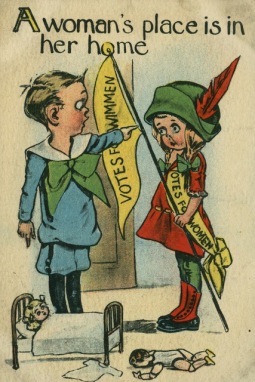 A few days later she encountered another one of these misogynists.

An old man was standing in the door-way of his shop; I spoke to him, unrolled the picture and asked him to subscribe. He was a strong Democrat and was not long in letting me know it. “You d—women think you will rule the country. There is a clique of you who go prowling around, having secret meetings, lecturing all over the country on women’s rights; here you are roaming around with that d— picture of that loafer Grant. There was one of your clique in here the other day, lecturing on temperance. I told her in plain English to leave my shop; I would have no women’s rights around me.”

I replied, “Thank you for your hint; I am not in your shop, nor do not intend crossing your doorway, for fear I might become polluted, for you certainly are the most profane ruffian I ever met.”