Amy Likins (or as she preferred, Mrs. J. W. Likins) was soon selling books as well as engravings. She usually took two or three new titles in her basket. Mark Twain’s The Innocents Abroad came out in 1869 and was easy to sell. Everyone liked reading Mark Twain.

After having remained at home for a few days, I started once more to try amongst the shipping. Here I met with good success, selling many engravings and taking many orders for “Mark Twain’s Innocents Abroad.” I had sufficient employment to keep me busy for several months amongst the shipping, wharfingers, and lumber-merchants.

Other titles she sold were Ladies of the White House, The Life of Sumner (biographies were popular), and The Sights and Sensations of the National Capitol.

She did not confine her efforts to San Francisco. She made sales trips to San Jose, Santa Clara, Santa Cruz, Stockton, Sacramento, and points between. If she saw them today, she would not recognize the cities and towns of the Bay Area that she visited.

The next morning found me seated in the Western Pacific R.R. cars bound for the so called city of Milpitas. When I arrived there, it reminded me of the old saying, that I could not see the town for the houses, which consisted of one hotel, two drinking saloons, one dry goods and grocery store, two blacksmith shops, one harness making shop, and a half a dozen dwellings; but the citizens were all very kind and polite. . . In this place I took some half a dozen orders, which I considered pretty well, for a small place.

Here she is in Mayfield, “a small village in Santa Clara county,” which must have been absorbed into some larger town. I can’t find it on a map. 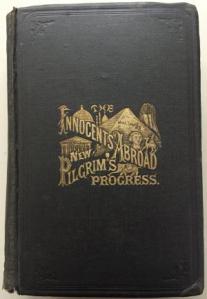 Taking my bundle, I started out; called at the several places of business, and had tolerable good success. I called on one gentleman I pitied very much; he had to use crutches. He told me he was a cripple, from rheumatism. Still he seemed energetic, and full of business, carrying on a drug-store and keeping the Post-office, and was contented and happy. He said, when I came around again, he would take Mark Twain’s “Innocents Abroad,” if I would bring it to him, as he was a great reader.

I called at the blacksmith shop, above his place. There was a man working there, an apprentice, I think, who was so low as to be abusive and vulgar, forgetting he ever had a mother. He was a stout, raw-boned, thick-lipped, flat-nosed, tangle-haired, uncivilized creature, who depended mainly on his strength more than his brains to make his way through the world, and would just as lief strike a woman as a man. With the exception of this ruffian, I was treated with the greatest of respect by all of the citizens of Mayfield; and was more liberally patronized than I had expected from so small a place.