The Lost States of America

Posted on September 8, 2018 by nancyleek

I came across this fun book titled Lost States: True Stories of Texlahoma, Transylvania, and other states that never made it, by Michael J. Trinklein (Quirk Books, 2010). This is a light-hearted and well-illustrated look at dozens of proposed states that never made it onto the map of the United States. Some were just wacky suggestions and others were serious proposals that were considered by Congress. Most are long-forgotten, but a few are still being promoted.

Many of these ideas tried to solve a geographic or economic problem: how should the Dakotas be split up, east/west or north/south, or, what to do with a territory such as Arizona/New Mexico that doesn’t have enough population (maybe call it Montezuma?)

There are some great names for states here. How about Absaroka, Deseret, Hazard, Muskogee (not in Oklahoma), Nickajack, or Yazoo?

California has generated more than its share of phantom states. Here is a little bit about each of the parts of California that might have been states in their own right (not counting recent proposals to divide California into 3, or 6, or 9 pieces)—

Nataqua: I wrote about Nataqua, the territory organized by Isaac Roop and Peter Lassen. It compassed an under-populated area of northeastern California and a swath of Nevada. Just one little problem: they drew the lines so that Susanville, the seat of government, was outside the boundaries. 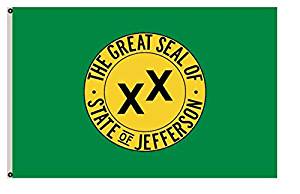 Jefferson: Made up of southern Oregon and northern California, this was first proposed in 1941 and is still an idea that is alive and kicking. Otherwise known as Wildfire Country at the present.

The flag shows a gold pan with a double X, represented the two regions that consider themselves “double-crossed” by their state governments.

Shasta: A small version of Jefferson comprising the northernmost counties of California (but not Tehama or Butte counties), first proposed in 1957. It all has to do with southern California stealing the north’s water.

South California: Promoted in 1859 by Andres Pico (brother of the last Mexican governor of California) as a place for the displaced Californios. He wanted to call it Colorado. Although Mr. Trinklein doesn’t mention it, there were also American Southerners who wanted to make a separate state in the south of California where slave ownership would be legal.

Sonora: That indefatigable filibuster William Walker took over Baja California and might have hung onto it, but he got greedy and tried to take the state of Sonora as well. The Mexican army ran him off. He then tried the same thing in Nicaragua and Honduras.

And last and likely least of all, Rough and Ready: The town declared its secession from the Union as “the Great Republic of Rough and Ready” on 7 April 1850, largely to avoid mining taxes, but voted to rejoin the Union less than three months later on 4 July, because they didn’t want to miss out on celebrating the independence of the United States. Trinklein says that they also seceded when Nevada County declared itself a dry county, but I don’t know if that part is true.