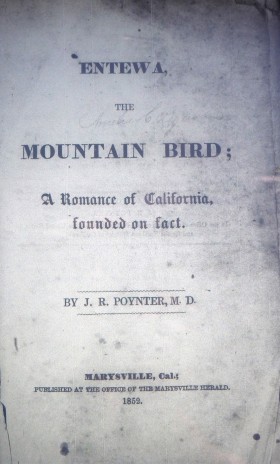 The first fictional work ever published in California was a tale of romance and adventure in the gold-mining camps, written by a young doctor and printed in Marysville. The title is Entewa; the Mountain Bird, and the author was J. R. Poynter, M.D.

As far as I know, there is only one copy of the book extant in the world, and it belongs to the Yale Beinecke Library. (Folks in Marysville ought to be checking their attics for rare books!)

Fortunately for readers like myself who like to track down literary curiosities, the book is on microfilm in the Western American Frontier History series. Meriam Library Special Collections at CSU Chico was able to obtain it for me from another university. I would not be surprised if I were the first person to read this work in decades.

The story takes place around Coloma, the site of the first gold discovery, in the year 1849. Our hero is Barkley, “a young man of some twenty-three summers, of medium statue [sic], with light hair, and well defined features.” It’s easy to confuse Barkley with Lieutenant Blakely, who is introduced in the same paragraph, but Blakely, although he possesses “a countenance that was as free and open as his heart was just and good,” will not turn out to be as perceptive and noble-hearted as Barkley.

This chapter, which begins, gratifyingly, with “It was a dark and stormy night,”* introduces several other characters, including an old mountaineer who tells the others, “Home! What, leave these diggings to go back on your old barren knobs beyant them hills? No, boys; never let sich notions trouble you as long as you kin make a ounce a day.” An ounce a day of gold flakes — all you need. Good advice from an old prospector.

Not much actual gold digging takes place in the story. There are bandits, robberies, chases, encounters with Indians, and a lot of palaver, but not much mining. Our hero is more likely to go out hunting for game than panning for gold.

For comic relief the author gives his readers a lanky backwoods boy from Missouri named Giles Jolt, and a comic Irishman who speaks in as thick a brogue as anyone could wish for.

“The bloody murtherers,” said Mike, seriously to himself, “an’ thim is what they are murtherin’ the poor craytures wid. Feth! Michael O’Gafferty, ye were the all-fir’dest fool that iver got the gold faver, to lave the home of yer fathers, an’ poor Jenny, an’ the boy in the bargain.”

But who is Entewa? Stay tuned for more about Entewa, the Mountain Bird.

*”It was a dark and stormy night” is the beginning of the opening sentence in Paul Clifford, by English novelist Edward Bulwer-Lytton. It was published in 1830, and I have no doubt that J. R. Poynter was an admiring reader of the book.

Nancy is a retired librarian who lives in Chico, California. She is the author of John Bidwell: The Adventurous Life of a California Pioneer.
View all posts by nancyleek →
This entry was posted in Entewa. Bookmark the permalink.

2 Responses to Entewa; the Mountain Bird