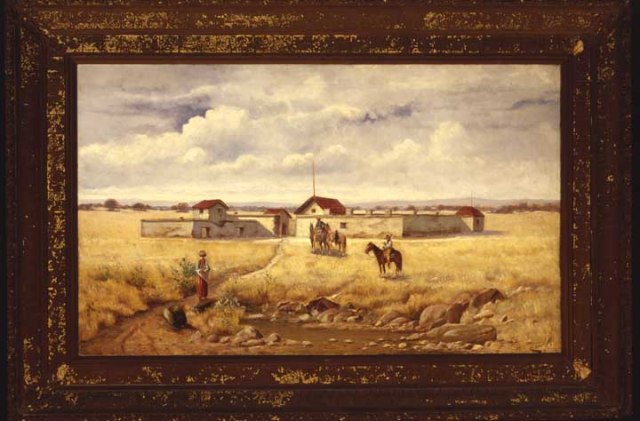 If you were living at Sutter’s Fort in 1845, before the Gold Rush, what was available for you to eat? Would you enjoy lots of good foodstuffs, or a limited diet? It could be both, depending on the time of year and your own imagination. But one thing is for sure — there would be beef.

Looking in the California Digital Newspaper Collection for information on women and side saddles, I came across something completely different. With the headline “A Pioneer Repast,” it was the story of Christmas dinner at Sutter’s Fort in 1845, by a man who was there.

It was published in the Christmas Day edition of the San Francisco Call in 1892. I turned the story into a vignette for the Bidwell Mansion Association’s annual “Christmas with the Bidwells” party and we will be performing it this Friday, December 6th inside Bidwell Mansion.

The gentleman telling the story relates how he went to the cook and asked him what he could come up with for Christmas dinner:

The cook was an English Cockney, but a good fellow withal, who, when approached upon the subject. declared that he could get up a menu that would rival Delmonico’s best efforts, if I would only leave the whole matter in his hands. I agreed to his terms, but did not quite see how he could do it, as our commissariat consisted wholly of beef, frijoles (brown beans), unbolted flour, Mexican panoche sugar, about the color of natural beeswax and of about the same consistency, with an abundance of chile colorado (red peppers), plenty of salt and black pepper, with coffee and tea. There were no vegetables, butter or milk, but he was so confident I let him have his own way.

Not only did the cook claim he could create a spread to rival Delmonico’s, but he also promised a genuine “John Bull plum pudding.”

And yet, as the author says, all he had to work with was beef, beans, unbolted (unsifted) whole wheat flour, red peppers, and brown Mexican sugar. Christmas Day came and the men sat down to dinner “with expectancy and no little curiosity.” Out came the first course:

You can’t say that the cook didn’t do his best to vary the menu!

And what of the “John Bull plum pudding? Wait until the next installment and I will tell you about the English cook’s greatest culinary accomplishment.

We will also solve the mystery of the author of this piece, a man who only signs himself as “S”.

Nancy is a retired librarian who lives in Chico, California. She is the author of John Bidwell: The Adventurous Life of a California Pioneer.
View all posts by nancyleek →
This entry was posted in Christmas, Uncategorized. Bookmark the permalink.