I am working on an article about John Bidwell’s activities during the year of 1850. It started with a short narrative I put together for Admission Day last year. During 2019 the Bidwell Mansion Association had a number of special events in honor of the two-hundredth anniversary of Bidwell’s birth, and for Admission Day I wrote up the story of how Bidwell brought the news of statehood to California.

I have written about John Bidwell and Helen Crosby, “the lady with the blue silk umbrella,” here before, but it’s a fun story and worth repeating. (Go take a look.) I wanted to expand that incident and cover Bidwell’s other activities during 1850. I thought I was almost done, and then I decided I should check some basic information for Helen Crosby and her parents. And that’s when I went down the rabbit hole.

E.O. Crosby as a state senator

He arrived in California via the Panama route in February 1849. He tried his hand at mining, as they all did, but as an attorney he soon saw that going into law and real estate would be much more profitable. He was a delegate to the Constitutional Convention in Monterey, and served in the first and second legislatures of the state as a Senator.

When John Bidwell was asked in 1850 to deliver a block of quartz to Washington, D.C., for the Washington Monument, Crosby asked if Bidwell could do him a favor. Crosby had a wife and a teen-age daughter in New York City. Would Bidwell escort them to California to join him?

It wasn’t unusual for men heading to the goldfields of California to leave a family behind. If things “panned out,” they would either come home with a sack full of gold, or send for the family. That was the situation for Crosby — he was doing well, California was growing and would soon be a state — it was time for the family to be reunited.

Elisha O. Crosby was born on July 18, 1818, the second child of Samuel and Mehitabel Crosby of Tompkins County, New York. The family was not well-to-do, but Elisha got a good education and studied law under his uncle in Buffalo.  In 1841 he was licensed to practice law and opened a practice in Elmira, New York.

In 1844 he joined a law firm in New York City. When news came of gold in California, he immediately caught “gold fever” and boarded a ship on Christmas Day, 1848. He left behind his wife and daughter.

Mary Helen Crosby, his daughter, was a young lady of 18 when she boarded the steamship to California two years later, so she was probably born in 1832. She is listed in the California census of 1852 as being 20 years old, which is consistent with a birth year of 1832.

Dad — 1818, daughter — 1832. Something didn’t add up. Was he 14 years old when she was born? Seems unlikely. And I couldn’t find any record of her or her mother before they arrived in California. Who were they?

Do we know anything about Crosby as a husband? Biographical notes on Crosby say little about his family life. The only marriage noted anywhere is:

In 1874, he married Frances Alma Crandall in Lincoln, Nebraska, and settled afterwards in Alameda. They had one son, Edward Oscar Crosby. (Note to the Crosby file at The Society of California Pioneers)

Well, that was puzzling. What about his other wife, the one who came to California in 1850? Had she died? What about his daughter, who married Samuel Hensley soon after arriving?

The first Mrs. Crosby did not die, at least not that soon. Mrs. Maria L. Crosby died in 1879. Notice that in her obituary she is called the mother of Mrs. M.H. Hensley, but not the wife or widow of E.O. Crosby. There’s a reason for that. 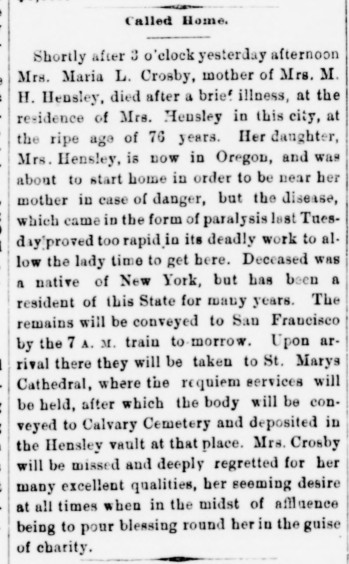 Next: The mystery gets murkier before it clears up

Nancy is a retired librarian who lives in Chico, California. She is the author of John Bidwell: The Adventurous Life of a California Pioneer.
View all posts by nancyleek →
This entry was posted in Elisha O. Crosby, Mary Helen Crosby. Bookmark the permalink.