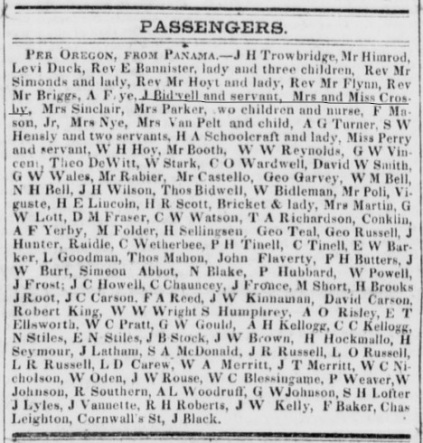 Mrs. and Miss Crosby came to California in October 1850 on the same ship that brought the news of statehood. They went to San Jose to be with Elisha O. Crosby, and within a few months Miss Mary Helen Crosby was married to Samuel J. Hensley, who was also on that ship. (You will find him on that passenger list.) 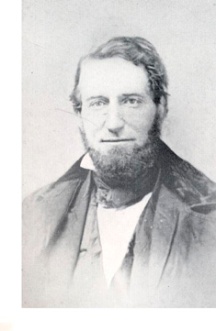 Elisha O. Crosby moved to San Francisco in 1852 and opened a law office dealing primarily in land grant titles. He specialized in the claims of the Spanish-speaking Californios, who had held the land under Mexico and were supposedly guaranteed their rights by the Treaty of Guadalupe Hidalgo. It was a frustrating  business that occupied him for the rest of the decade. After years of litigation through the Land Commission and the courts, many of the titles were not upheld, and the land was taken over by “speculators and sharpers.” In his memoir he complained:

In God’s name, what sense or right was there on the part of the Government of the U. S. in putting these claimants to the enormous expense of carrying the litigation of their claims to Washington? There was not one in fifty of these claimants who could stand any such expense and the result has been the transfer of these claims to speculators and men of wealth, who took them up for little or nothing and have been fighting them out for what they could get. Thus the most outrageous wrongs were perpetrated on the old California Claimants. (Memoirs of Elisha Oscar Crosby; reminiscences of California and Guatemala from 1849 to 1864. Edited by Charles Albro Barker)

In 1860 Crosby set out for Washington, D.C., but stopped over in Guatemala for a few months, where he made the acquaintance of dictator-President Rafael Carrera. This experience positioned him for his appointment by President Lincoln as ambassador to Guatemala for the next four years.

All this time he makes no mention in his memoir of a wife or family. After his return from Guatemala he went to Philadelphia, and then onward to Fremont, Nebraska. (I have no idea why.) But Nebraska must have been a lively place, because here is where we get a hint of his private life.

Handwritten single-page document evidencing the agreement of Crosby and Deer to their separation after living together unmarried for “many years.” Signed by Crosby, Deer, and Deer’s sister, Mary J. Field, as a witness

This is the description of an item in the E.O. Crosby Collection at the University of California, San Diego Special Collections. If you are interested, the link to a detailed finding guide is at the Online Archive of California.

So, in 1872 he separates from Francis Ann, with whom he has been living for “many years,” then in 1874 he marries another Frances: Frances Alma Crandall, nicknamed Frankie. They have one son, Edward Oscar Crosby, born in February 1875.

On the marriage record, Crosby gave his age as 45, when actually he was about to turn 56. Frankie’s age was either 24 or 27, depending on whether you accept the marriage record or the 1900 census. (It’s surprising — or maybe not — how often people fudged their ages on various documents.)

But what about his wife in California? What became of her in all this activity?

There is a story there as well—–

Nancy is a retired librarian who lives in Chico, California. She is the author of John Bidwell: The Adventurous Life of a California Pioneer.
View all posts by nancyleek →
This entry was posted in Elisha O. Crosby, Uncategorized. Bookmark the permalink.

1 Response to The Crosby Puzzle Continued