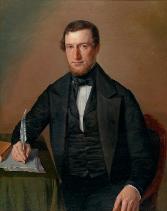 So why did Elisha Crosby have a daughter only 14 years younger than himself?

Let’s go back to 1844, when Crosby was a young lawyer in Elmira, New York.

Here is an excerpt from the Reports of Cases Argued and Determined in the Supreme Court, at Special Term for the state of New York, 1845, which can be found on Google Books.

State of New York, county of Orange, ss. Ebenezer Seely of the town of Chester in said county, being duly sworn deposes and says, that he is about to commence a suit in the supreme court of said state, against Elisha O. Crosby, for criminal conversation with Maria Seely the wife of the deponent; . . . that about the month of October, 1844, the said Elisha O. Crosby left the said town of Elmira with the said Maria Seely, and removed to the city of New York, where . . . the said Elisha O. Crosby has ever since resided with the said Maria Seely in adulterous intercourse . . .  (p. 231)

Oh dear. Trouble, with a capital A, and that stands for Adultery.

Mr. Seely wanted Crosby held on bail of $2,500, but the case was dismissed by the court. If anything more came of this, I don’t know what it was. Maria and Elisha continued to live together, but I doubt there was ever any divorce or remarriage.

In 1844, when they ran away to New York City, Crosby would have been 25 years old. Census records and her obituary point to Maria as having been born in 1803, which made her 39 — that’s 16 years older than Elisha! That is a considerable gap. She was certainly old enough to have a young daughter, fathered not by Crosby but by her legal husband.

This is an odd story, but there it is in the legal record and the census. It’s the only solution to the puzzle that I could figure out.

All of this hullabaloo would have made California look like a great place to escape to, especially for 18-year-old Mary Helen, whose household (it would seem) was somewhat irregular. Traveling to San Francisco was the opportunity to start over with a new name and put the past in the past. It reminds me of something Oscar Wilde said:

“It’s an odd thing, but anyone who disappears is said to be seen in San Francisco. It must be a delightful city and possess all the attractions of the next world.”

Did John Bidwell know any of this when he met Mrs. and Miss Crosby in New York City and arranged to escort them to California? It’s doubtful. He was a stranger to the city, and probably not one to pick up gossip. As far as he knew, Mrs. Crosby was a respectable married woman. Did he notice that she looked so much older than her husband? Did Crosby look older than he really was? Because in truth he was only one year older than John Bidwell, and not old enough to have a teen-age daughter.

Next: A Few Odds and Ends about the Crosby Family

Nancy is a retired librarian who lives in Chico, California. She is the author of John Bidwell: The Adventurous Life of a California Pioneer.
View all posts by nancyleek →
This entry was posted in Elisha O. Crosby, Mary Helen Crosby, Uncategorized. Bookmark the permalink.