Bidwell and the Bear Flag 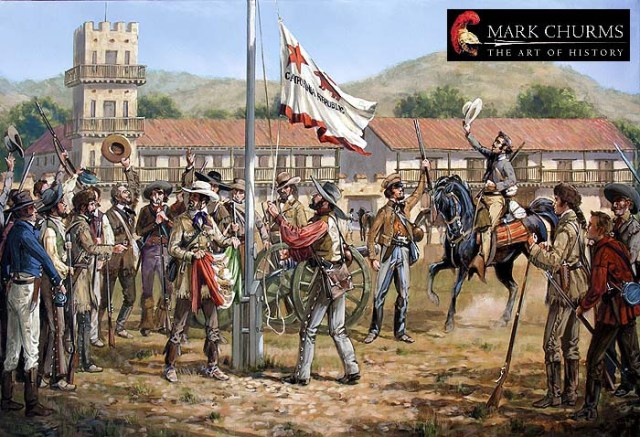 Not the way it happened according to John Bidwell

What did John Bidwell think of the Bear Flag Revolt and the famous Bear Flag raised at Sonoma? Not much, if you asked him, and more than one person did ask.

He mentions it briefly in “Fremont in the Conquest of California,” published in the Century Magazine in February 1891. Another version appeared shortly thereafter in the big midsummer edition (4 July 1891) of the popular San Francisco magazine The Wasp. His account from the Century is well known — it appears in Echoes of the Past and online at The Museum of the City of San Francisco.  The version he told the Wasp is fuller, but less well known.

With regard to the bear flag incident, which has been so much heralded in romance and history, there was no further basis than a spirit of amusement among a few of the men. In the plaza in front of the residence of Gen. Vallejo, in Sonoma, stood a flag-staff which that gentleman had used when he was Military Commander of California, previous to the time of Castro. The Mexican flag had not floated on it for several years or since the retirement of Vallejo from office. When Fremont’s vanguard of mountaineers took possession of Sonoma, after sending Gen. Vallejo and other as prisoners to Sutter’s Fort, it was suggested that some kind of a flag be made and put on the deserted pole. Some one suggested that the new flag should represent a bear rampant, with lifted paw in the act of crushing a coyote, but that was too much for the artistic ability of any one present, so the plan was simplified to a plain bear. This was simply for amusement and without any idea of selecting the emblem of an independent movement against the Mexican authorities.

One of the men was William Todd (since the war of the Rebellion I met Mr. Todd and learned from him that he was a nephew of Mrs. Abraham Lincoln, and brought up in Abraham’s family), who found a small quantity of old reddish paint and with it attempted to make, on a piece of common brown cloth, the representation of a bear, and the same was run up on the flag-pole. The whole affair was ludicrous. Only a few men – two or three – possibly four or five at most – had anything to do with it, and certainly no officer or prominent men took any part. Mexicans looking at the flag were heard to say “coche,” a localism for pig or small hog. The flag was flying when Fremont was in Sonoma, but I doubt he ever noticed it or knew it was there, and this is all there was at the time to the bear flag incident, but it seemed to lend itself readily to romance, and in a short time was distorted and misrepresented until the story went out to the world that an independent movement on foot in California had formally adopted this flag as a standard. 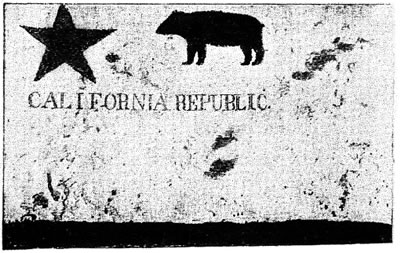 Grizzly bear or pig — you decide.

So it was all just a lark. Making up a flag while waiting for the real war to happen. Or so John Bidwell says. He didn’t get to Sonoma until a few days after the Bear Flag had been run up the flagpole.

John Bidwell never saw the California state flag as we know it today. California didn’t have a state flag until 1911. (There is an excellent history of the Bear Flag at the virtual Bear Flag Museum.) The 1846 Bear Flag was the inspiration for the flag we know and love today, and I think John Bidwell would have liked the way it turned out. 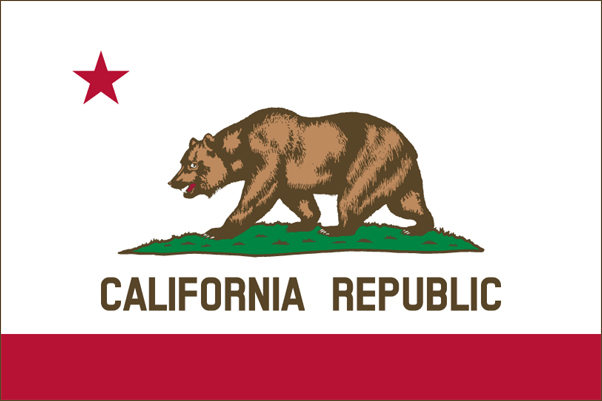