John Marsh went to San Jose and got passports for everyone in the Bidwell-Bartleson Party—everyone except John Bidwell. Bidwell suspected that Dr. Marsh wanted to keep him at his ranch as a useful
person to have around, but Bidwell was having none of that, and set out for San Jose on his own to get a passport. Arriving at Mission San Jose on November 16th, he was promptly thrown in jail by Mexican soldiers until he could find someone to explain his presence to the authorities.

The jail would have looked a lot like this picture of the first jail in Monterey, made of adobe bricks and wood. 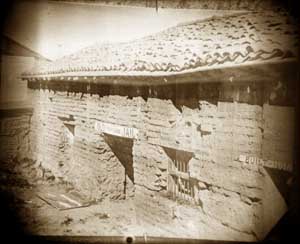 He spent three uncomfortable and flea-bitten days in jail until he was able to hail a passerby who understood English.

“He proved to be an American . . . and he kindly went to Vallejo, who was right across the way in the big Mission building, and procured for me the passport.” The passport was made out for Juan Bidwell and signed by Comandante General Mariano Guadalupe Vallejo. Vallejo could have sent the whole party of Americans back where they had come from. But Alta California had need of skilled labor, and he decided to let them stay.

With passport in hand, Bidwell set out for Marsh’s ranch, arriving there late on the 18th. He didn’t plan to stay with Marsh, however. He had heard about John Sutter’s establishment on the American River, and that would be his next stop.