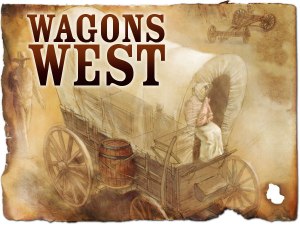 The Chico Enterprise-Record today published a full-page color feature marking the 175th anniversary of the “first organized wagon train that left Missouri for California.” I can’t find it on the E-R webpage, but you can find it at the Orange County Register site.

John Bidwell, one of the leaders of the Bidwell-Bartleson Party, helped blaze the California Trail, the overland route that would bring hundreds of thousands of migrants to the Golden State. The migration that started with one small group in 1841, would become a flood in 1849 and the early 1850s.

Although the feature states that the Bidwell-Bartleson Party left Independence, Missouri on May 9th, 1841, they did not actually get going quite that soon. John Bidwell showed up at the rendezvous at Sapling Grove, a campground near Westport (now part of Kansas City) on May 9th.  When he arrived he found only one other wagon there. Other emigrants trickled in over the next several days. On May 18th they formally organized their party, electing a president, secretary, and captain, and on May 19th they started out on the trail.

I will be posting more about the adventures of John Bidwell on the California Trail in the coming days, so stay tuned.