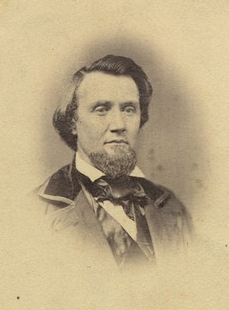 David Smith Terry was born in Kentucky in 1823 and moved with his family to Texas as  young boy.  All his life he considered himself a southerner and supported the southern cause. He studied law in Texas and was admitted to the bar in 1845, fought in the Mexican War in 1846, and in 1849 joined the gold rush to California. Like many others, he found riches not in the diggings, but in his professional field. He rose rapidly in the ranks of law and politics and in 1855 he won a seat on the California Supreme Court, supported by the Know-Nothing Party. Other than that, Terry considered himself a Democrat.

At 6 foot 3 inches, Terry was an imposing figure. He was known for his hot temper. In 1856, representing the state government, he went to San Francisco to take on the Vigilance Committee, an extra-legal band of citizens formed to fight crime and corruption. In an altercation he stabbed Sterling A. Hopkins in the neck with a Bowie knife. Terry was jailed, but released when Hopkins survived the attack.

In 1859 Terry failed in his bid to be re-elected to the Supreme Court, and he blamed his loss on fellow Democrat David C. Broderick. Terry was a leader of the southern faction of the party; Broderick represented the northern abolitionist wing. The former friends fell out over their irreconcilable political views (as did the entire Democratic Party soon after).

They traded insults until Terry sent a note demanding a retraction of remarks made by Broderick. His refusal to do so led to their meeting at Lake Merced (just outside San Francisco city limits in Daly City) early on the morning of September 13, 1859. Broderick fell, fatally wounded by a pistol ball. His death made him a hero and martyr in the fight against slavery, and Terry’s political career was ruined.

You can read more about the Broderick-Terry Duel in this Wikipedia article and at this National Park Service site. 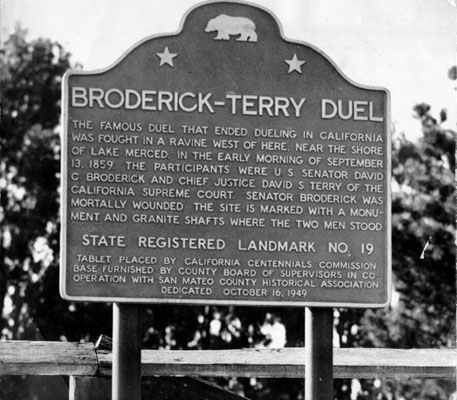 Just then the Civil War came along, and Terry went back to Texas and joined the Confederate Army, rising to the rank of colonel. After the war he returned to California and resumed his legal practice.

In 1884 he became part of the team of lawyers assisting Sarah Althea Hill in her bid to get her marriage to former senator William Sharon validated and then dissolved. In December of the same year Terry’s wife, Charlotte, died. In January 1886 he married his client, Allie. Together, with great determination, they continued to pursue her right to a portion of property belong to millionaire Sharon, who had died in 1885.

Public interest in the case languished for two years, although the lawyers were busy with a few side issues. Then in 1888 drama erupted once again in the courtroom.

Next: “Marshal. put that woman out!”

1 Response to The Tempestuous Life of David S. Terry