The Scandalous Saga continued — Disorder in the Court

Sarah Althea Hill, now Mrs. David S. Terry, along with her attorney-husband, were back on court on September 3, 1888 to hear the decision in one of the appeals. The California Supreme Court had supported the lower state court ruling that the marriage was legitimate, but the federal court had ruled just the opposite — the marriage contract was invalid. Justice Stephen J. Field would now pronounce on the appeal to the federal court’s decision. 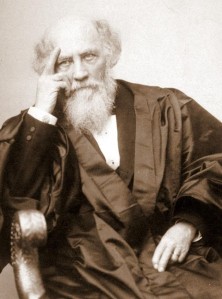 Field was the judge who replaced Terry on the California Supreme Court in 1856. In 1863 he was appointed by President Lincoln to the newly created tenth Supreme Court seat. This seat had been added to give balance to the court by bringing in a justice from the Pacific states. (That’s a nice bit of trivia — When were there ever ten supreme court justices?)

At the time, the U.S. supreme court justices also were responsible for the federal circuit courts, and it was in this capacity that Justice Field gave his ruling that the federal judgement would stand. He ordered Mrs. Terry (Allie) to surrender the marriage contract.

Allie was outraged. She had guarded that precious contract as her only means of getting her alimony. She not only refused to give it up, she went further. She accused Justice Field of having been bought off by the “Sharon people.” 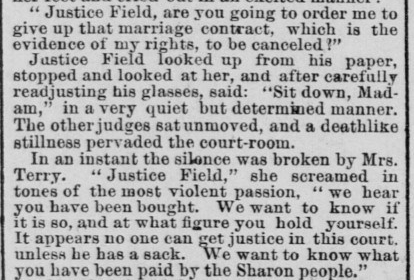 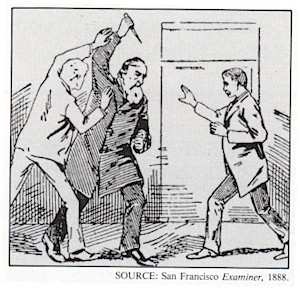 Justice Field was not going to stand for that. He ordered the marshal to remove Mrs. Terry from the courtroom. As she continued to revile the judge, the marshal moved to take her out. Her husband, David Terry, stopped him, declaring “No living man shall touch her!’ and then struck the marshal in the face with his fist. As the marshal dragged Allie screaming out of the courtroom, Terry hastened after, drawing his Bowie knife as he went.

Terry, struggling to strike a blow with the knife, was overpowered and disarmed. A loaded revolver was found in Allie’s satchel. Screams and shouts filled the courtroom.

The members of the press were having a field day. What a way to sell papers! The headline in the Morning Press was “TERRYFIED.”

But Stephen Field was not cowed or terrified by this display of violence. After the mid-day recess he came back and sentenced David D. Terry, former Chief Justice of the California Supreme Court, to six months in jail for contempt of court, and his wife to 30 days.

While in jail, Allie continued to rail against Justice Field, and her husband, Terry, sent the judge several threatening letters. In less than a year, the tragic end of the Sharon-Hill-Terry drama would play out in a railroad depot dining room.

Next: Showdown at the Lathrop Depot

1 Response to The Scandalous Saga continued — Disorder in the Court