The Scandalous Saga continued — Showdown at the Depot

Justice Stephen J. Field had earned the undying enmity of the Terrys when he ruled against them in September 1888, and even more so when he sent them to jail for their violent antics in court. David S. Terry, who thirty years earlier had shot David C. Broderick in a duel, was still a man who knew how to hold a grudge. And how to act on it.

Terry served his six months in the Alameda County Jail and then retired to his ranch near Fresno. There is no indication that he laid plans against Judge Field. Only a happenstance encounter at the Lathrop Railroad Depot brought the drama to its bloody end.

Because Terry had uttered verbal and written threats against Field, a deputy U.S. marshal was assigned to Field as a bodyguard when Field returned from Washington, D.C. to California to sit on federal cases in the Ninth Circuit. The deputy marshal was David Neagle, the same man who had disarmed David Terry during the melee in the courtroom the previous September.

Field and Neagle boarded a train in Los Angeles on August 13th, 1889, bound for San Francisco. Knowing that Terry lived near Fresno, Neagle watched as the train took on passengers in Fresno at midnight. He saw the Terrys as they boarded. They were unaware that their nemesis was aboard the same train.

Early in the morning the train stopped at Lathrop, a town just south of Stockton. Passengers alighted to take breakfast in the depot hotel. Field and Neagle had just sat down to eat when the marshal saw the Terrys enter the restaurant. Allie (Mrs. Terry) wheeled around and went back to the railroad car to get her handbag (where she kept a pistol). David Terry went to sit at a table, and then spying Justice Field, he walked over to where the judge was seated, came up behind him, and slapped him twice on the face.

Neagle yelled “Stop that!” and placed himself between Terry and Judge Field. Quickly  pulling his revolver, he thrust it against Terry’s chest and fired. As Terry collapsed to the floor, he fired again at his head. 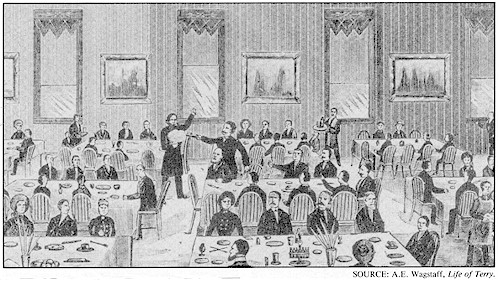 The restaurant erupted in pandemonium as some customers fled the room and others moved to surround Terry’s body. Neagle loudly  declared himself an officer of the law. At that moment Allie came into the room, saw her husband lying on the floor covered in blood, and rushed to him to cradle his head and weep over his body.

Sarah swore out an arrest warrant against Deputy Neagle and Justice Field for the murder of her husband.  Both were arrested and Deputy Neagle was taken to jail, but Justice Field was released on his own recognizance. The charges against Field were later dropped. Neagle’s case went all the way to the U.S. Supreme Court, which upheld his actions “as he was acting under the authority of the law of the United States.”

This incident, and the precedent it set in the case of Deputy Neagle, is lad out in full at the webpage for the U.S. Marshals Service.

Next: The Sad End of Sarah Althea Hill Sharon Terry