Pres Longley, the Bard of Butte

Pres Longley, the “Bard of Butte,” wrote many columns and poems for the newspapers. This column appeared in the Weekly Butte Record on December 26th, 1868. It’s lengthy, so I am just going to give you the beginning, and the part addressed “to the juvenile readers of the Record about Santa Claus.”

In spite of the troubles of this old world, Pres encouraged his readers to live in gratitude and good cheer. He then tells the story of a “lazy girl” who hung up her stocking on Christmas Eve, and found nothing in it in the morning but the following two lines:

Your stocking is dirty, I’ll put nothing in it,
Till you wash out the dirt; ’twill take but a minute.

But another girl, who kept her stockings clean, had better luck, and here is her poem: 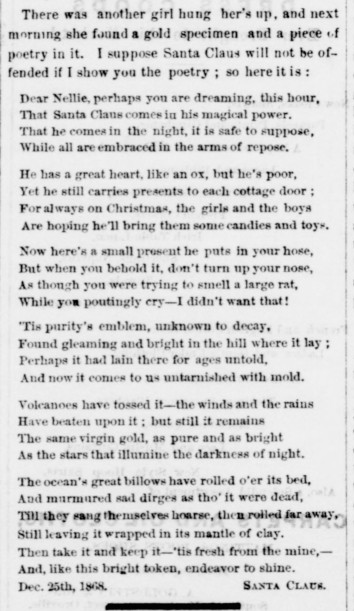 Now that’s something I would like to find in my stocking, a nugget of gold, “as pure and as bright / as the stars that illumine the darkness of night.” May we all have a merry and joyful Christmas!

Nancy is a retired librarian who lives in Chico, California. She is the author of John Bidwell: The Adventurous Life of a California Pioneer.
View all posts by nancyleek →
This entry was posted in Pres Longley, Uncategorized. Bookmark the permalink.