A Scandalous Saga of Cartoons

The Wasp delighted in lampooning the Sharon trial in cartoons. There were far more than it is worth showing here. So — one more cartoon, probably the last, showing what the principal players would look like if the trial dragged on for another 25 years, as it felt like it might. 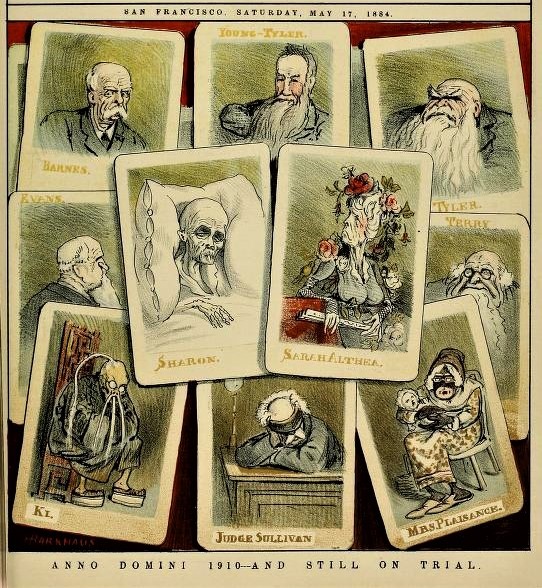 Poor old William Sharon and Sarah Althea Hill, who claimed to be his wife, are featured in the center. If Sharon had lived until 1910, he would have been 89 years old, a not impossible age, but in reality he died in 1885, at the age of 64, a year after this cartoon appeared. Althea, who did indeed love to deck herself in roses, lived until 1937 (!), unfortunately dying in the state asylum for the insane.

Surrounding the pair are their attorneys, with Judge Sullivan (who must have had a tendency to fall asleep on the bench) at the bottom.

The two figures who draw our eye are Ki, on the left, and Mrs. Plaisance, on the right. Artists in the Wasp drew minorities and people of color in the harshest style of caricature. Ki was Sharon’s Chinese manservant — there is no photograph of him that I know of, so I don’t know if he really wore a queue and a Fu Manchu mustache. That was just the way the artist would invariably indicate a man from China. 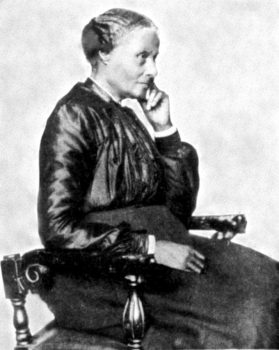 “Mrs. Plaisance” is Mary Ellen Pleasant, usually labeled Mammy Pleasant. She was a friend and supporter of Althea, a successful businesswoman, and a fascinating figure in her own right, who looked nothing like this cartoon.

Here is the only undisputed photograph of Mary Ellen Pleasant. This is how Sarah Althea Hill would have known her.